More postcards for iHanna’s Spring Postcard Swap. I’ve gone through postcard-making phases before. They are fantastic instant gratification when I’m working on a larger piece simultaniously. The postcard at the top is a throwback to my cut paper mandalas from last year. The bottom one is me playing with the hex punch I’d forgotten I’d bought. I love finding new old supplies!

Update: Mailed off the blue one as a sympathy card.

I jokingly named this one: “data concerning particles, knights, & butterflies” because it’s part of the heading on the chart. I thought it was funny but now I kinda want to read that novel. Love the colors on this. Love the movement. Love how the colors are echoed around the page. Entertained by how the gelli print makes the edge of the room over the knight’s head and then on the right edge makes me think of a flag. Love how the black behind the butterfly suggests either the butterfly’s wings are flapping or another flying creature.

Not feeling it today. Had to make myself work. Made a mess on my desk looking for bits to glue on postcards. Went to talk to someone about a commissioned piece. Made plans with her and then came home to my messy desk. Cleaned up the mess. Organized the pile of things I found for the postcards. Started a spread in my altered book. Finally gave up and went to do something else.

Vanessa, from Get Messy, posted this amazing video yesterday. And it’s been churning around in my head. The idea of letting go of my art. (Spoiler: the women in the video, Orly Avineri, takes her journal and ties it on the end of a rope, leaves it in the ocean, retrieves it, and makes something new out of what is left.) A lot of times in the things I make, I am drawn to the “pretty.” It might not be conventionally pretty but there is some aspect of what I work on that I find beautiful. Sometimes that’s color, sometimes that’s repetition, sometimes that’s flow or movement. But what happens when I take away what is pretty? Even for me? Is it still worth doing? Still meaningful? Thinking about letting go.

So these are the postcards I made from the pile of options I collected on Tuesday. You’ll often hear artists talk about limiting their options. That a smaller set of choices allows for more creativity. These postcards are a good reflection on that. I have four trays of tiny pieces of paper to chose from: scraps of paper, scraps of prints I’ve made, ephemera I’ve collected, postage stamps (mostly from Nepal). It’s all stuff I’ve collected over the years. But when I am working on one postcard, those four trays of visuals to look through are more debilitating than helpful. Sorting them into a possibility pile on Tuesday allowed me to cull it down even further today and come out with three postcards I feel are very strong and then three that are interesting but maybe not the most visually striking.

When I was in Nepal in 2012, I snapped a photo of some super fun graffiti on a retaining wall in downtown Kathmandu. I was shocked by the bright colors in a place that is so dusty during that time of the year and I was more shocked to be able to read the words. Seeing it woke me up a little bit since I was dealing with so much culture shock that particular afternoon. Since then I’ve been a little bit obsessed with art in public spaces. Where is the line between what makes it art and what makes it visual noise in an already very visually busy place? I started a Pinterest Board of  public art so I could ponder it some more.  But I’ve never seen the photo on the right on Pinterest or anywhere else. Thinking about graffiti today, or as my son calls it very emphatically and over-articulately, “GRAPH. FEE. TEE.” What do you think when you see wall art it in the city? More noise or city beautification?

Torrie over at Fox & Hazel is running a 30 Days of Watercolour challenge on Instagram this month. Liza and I decided to jump right in! So here are our first two days. Mine are on the left and Liza’s are on the right. I was fascinated to see how Liza interpreted the prompts. The first day was lines and the second day was red. So fun to see her creative brain develop!

I also discovered this week that I prefer gouache to watercolor. I got a tube in my Spring Art Bento Box. I used it at the same time as the watercolors today, I realized I like the way the gouache covers better than the watercolor and I like the lines the gouache leaves behind. I’ve also been enjoying my Big Picture Classes six month’s free I won from Caylee Grey’s giveaway a few weeks ago on her Instagram feed. In the class I’m taking about water coloring letters, the instructor gives some great advice for using a water brush. I busted mine out and am tickled I’ve (re)discovered this fantastic tool.

What I read this week:

This book is fascinating. She gave a vintage pic to a bunch of collage artists and seeing what they made of it is amazing. I marveled and enjoyed comparing and contrasting the finished pieces.  I love Danielle Krysa’s blog, podcast, art, & books. Big fan. Seriously having to work on not being stalker-ish.

What did you work on this week? I wanna hear all about it! 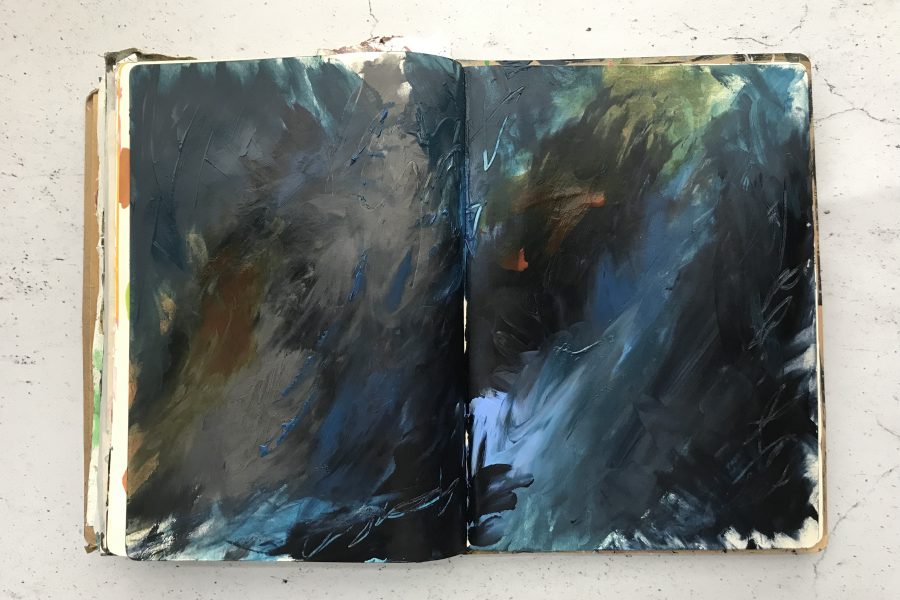